VELO’ RIDES ON IN TIME FOR TOUR DE FRANCE 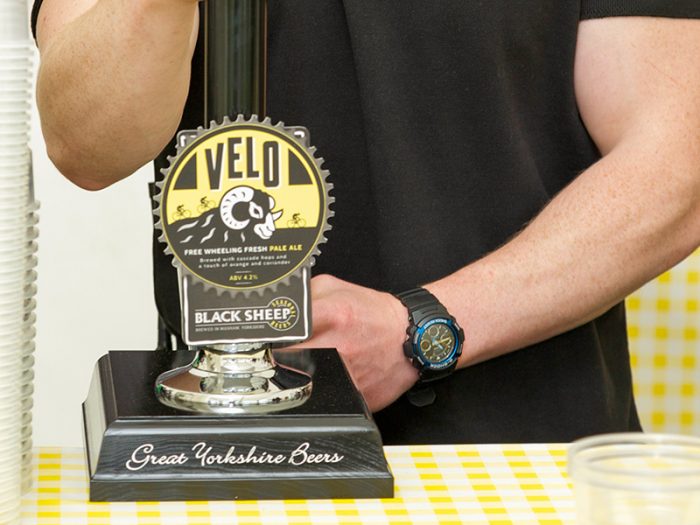 Our best-selling seasonal ale is back by popular demand – two years since its launch when the iconic Tour de France passed by our brewery door.

Velo, which was originally brewed in preparation for Le Grand Depart Yorkshire, in July 2014, and as a celebration of the sport, will feature in pubs throughout the country in July as Black Sheep’s latest seasonal beer, to coincide with the start of this year’s Tour de France on 2nd July, in Le Mont-Saint-Michel.

A 4.2% ABV ‘freewheeling’, fresh pale ale, Velo – the French word for ‘bicycle’ – is brewed with Cascade hops and a subtle hint of orange and coriander. It was initially developed and tested in Black Sheep’s microbrewery, but was scaled up in the brewery’s full plant.

Following the success and popularity since its launch, Velo, which was initially to be sold only in casks, became a permanent part of the Black Sheep flock of bottled beers.

Jo Theakston, Sales and Marketing Director at Black Sheep Brewery, said: “We could never have imagined the success we have enjoyed since the launch of Velo. It is now our biggest-selling seasonal ale to date and this July we are offering it once again to pubs across the country. The response we received amongst our customers and pub trade was overwhelming and led to the decision to offer Velo all-year round as part of our permanent bottled range.”

More than 20,000 people lined the streets of Masham to witness the Tour de France riders pass through the town at ‘Le Grand Party’ in July 2014.

Mr Theakston added: “The town hosted arguably the biggest party it will ever see and was the perfect time to release a cycling related beer, given the occasion in Yorkshire’s great history. This success was followed by last year’s Tour de Yorkshire and now bike enthusiasts will be able to enjoy Velo in time for this year’s Tour de France.”