We are taking a stand to help the fight against climate change and have launched our first ever carbon neutral cask beer:

In April 2022, we launched a new permanent cask beer brand to our portfolio called Respire. Not only is Respire an amazing pint packed full of flavour, it is also completely carbon neutral.

Scroll down to learn more about its journey to being officially carbon neutral.

Cask beer is a particularly low impact way of drinking beer. In comparison to a single use bottle or can, a typical cask could be reused for up to 20 years. Typically, cask beer is locally sourced, and given beer is heavy, this cuts down on all important delivery miles. At the same time we are working with our suppliers and partners to minimise the impact of our brewing process and on projects to manage our waste streams effectively such as our Warren’s Partnership.

Initiatives like this help to move us toward a circular economy with waste and give a lower baseline impact of our cask beer. However, to reduce our impact further we worked with an independent recognised energy consultant to calculate the carbon footprint of our cask beer and specifically our new carbon neutral Cask beer – Respire.

Once the footprint has been measured this tells us the equivalent ‘CO2e’ weight of our cask beer. It is typically measured in Kg or tonnes. CO2e or ‘Carbon Dioxide equivalent’ is a worldwide recognised unit of measurement that is used to standardise the adverse effect of all greenhouse gases on our climate.

We chose to offset the effect of this CO2e with high-impact credits from Verra’s verified carbon programme, one of the world’s leading carbon verification schemes. These credits represent investment into two verified bio-diversity projects in Peru and Indonesia, which guarantee the permanent removal of all the carbon associated with Respire.

The Katingan Metaya Project in Indonesia is about preventing the release of locked up carbon. 90% of the carbon in the 157k ha project is in the underlying peat soils, (up to 13 meters deep).

The area was under threat of conversion to industrial acacia, which would have resulted in the release of carbon through forest clearance, draining and burning of the underlying peat. The project offers a viable alternative to conversion, preventing the release of 447 million tonnes of CO2e over 60 years, making it the world’s largest forest-based avoided emissions project, with a total climate impact equivalent to the annual emissions of France.

More than 35 new species have been discovered through this project’s endeavours. It is home to around 6,000 plant species, more than 80 large and medium sized mammals, around 180 species of fishes, and over 600 species of birds.

The Yorkshire Dales has only 4.3% woodland coverage against the national average of 13%. Increasing tree coverage helps promote increased bio-diversity, absorb carbon, protect against flooding (a real problem in recent years) and create natural spaces where people can relax and enjoy themselves. This is our way of investing in and protecting the beautiful landscape we live and work in.

RESPIRE IS JUST THE BEGINNING

Creating a carbon neutral cask beer is the start of our journey towards becoming a more sustainable brewer. We realise we are at the beginning of the journey and there is lots more we can do, but we have made a start. It’s important to us that we are contributing to a sustainable future and protecting the environment and communities around us. Watch this space for more developments! 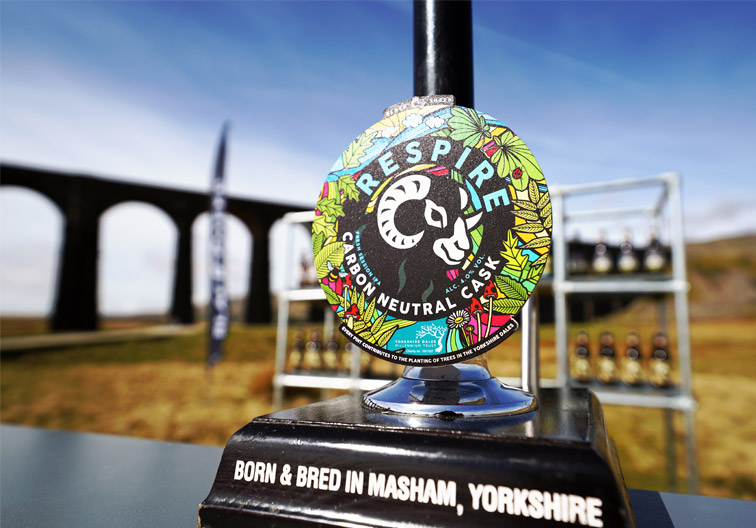